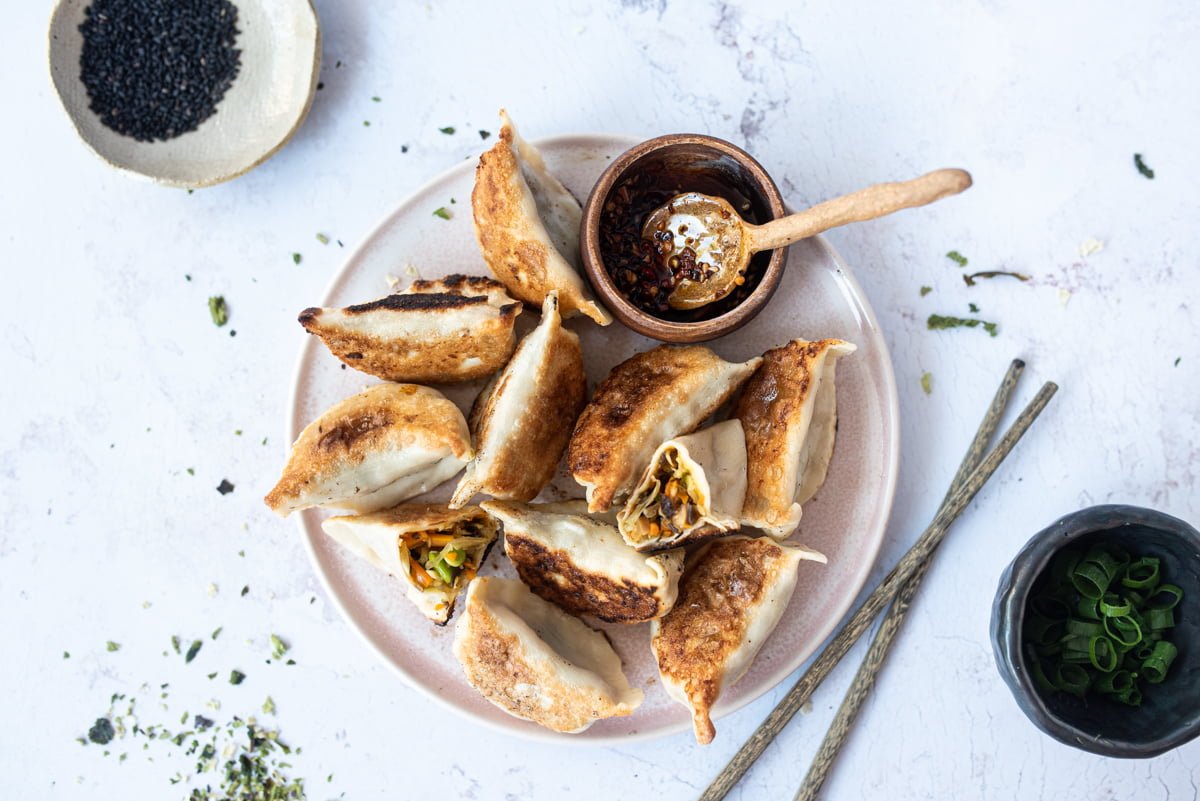 The foundation (based recipe and folding method) of these dumplings are taught to me by my mother (a.k.a the Dumpling Queen). These vegetarian dumplings are great to prepare ahead and defrost when needed. They are easy to make and great for kids to get involved. This recipe is crunchy, umami and flavourful. The folding looks hard but you will look like a pro once you get the hang of it!

1Mix all vegetables together in a large mixing bowl. Rainbow Seaweed Flakes would be rehydrated in a few minutes once the seasonings are added

1Prepare a small bowl of water for sealing the dumplings

2Place a piece of wrapper on your palm, scope a tablespoon of filling and place it in the middle of the wrapper

3Wet the edge of the wrapper with your finger with water

4Fold wrapper in half, starting from one side, gently fold the wrapper towards the middle ensuring the wrapper is sealed

5If you are intending to pan fry the dumplings, it’s best if the dumpling can stand up on it’s own

1Heat a non stick pan with a tablespoon of vegetable oil

2Once the pan is hot enough (just before it steams, arrange the dumplings on the pan with the flat bottom down

5Close the lid and let the dumpling cook for 5 minutes

6Remove the lid and let all liquid evaporate

1Remove dumplings from the pan onto a plate, garnish with sesame seeds and spring onion

These dumplings can be steamed or pan fried. In this recipe, we choose to pan fry for extra flavour. The choice of vegetables can be adjusted according to your liking. Bok choy, water chestnuts, yam and tofu are also great options. Just avoid choosing vegetables that have high moisture content. They are great main meal options which can be eaten on its own or with vegetables and noodles.

Wood ear mushroom/fungus is a very popular ingredient in Chinese cooking. They are widely available in Asian grocers and usually come in dehydrated form either whole or in stripes. Rehydration with hot water for 30 minutes is required before use. It adds a crunchy texture to soups, stir fries and dumplings.